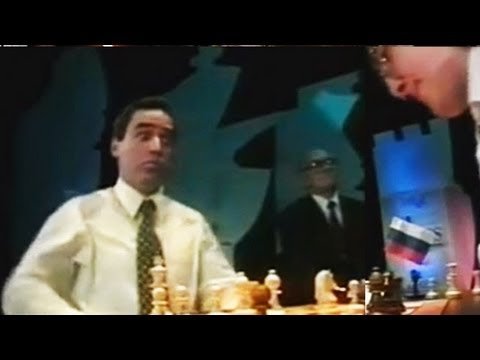 Daniel King commentating on Garry Kasparov at the Intel Grand Prix at the peak of his career. One of the most expensive chess video series ever made, what could be better! Get instant digital access to the rest of this 7 hour chess series – with 35% off!! ► https://ichs.co/2ztaGRs

The 1995 Intel Grand Prix Series was an incredibly exciting 😲 series of chess tournaments held in different major cities throughout the world, featuring a knockout format of rapidplay and blitz chess to decide the ultimate champion among the world’s best players of the time (including Garry Kasparov, Viswanathan Anand, Vladimir Kramnik, Vassily Ivanchuk and Michael Adams).

With big cash prizes of $30,000 for 1st place AND an extra $50,000 for the top ranked player across each of the legs, no-one was holding back! The whole event was packed with double-edged attacking games, frantically commentated on by GMs Maurice Ashley and Daniel King.

The final saw the ultimate matchup: Garry Kasparov vs Vladimir Kramnik! Garry Kasparov may have been the world chess champion but he wasn’t the overwhelming favorite against a young Kramnik who many, Kasparov included, were calling a genius.

This chess video covers the first game of the final. Garry Kasparov has White and opens 1.e4. Kramnik counters with …c5 – the Sicilian Defense. Anyone expecting an opposite-side castling, all-out attack on both sides of the board would be disappointed – for now. The queens came off as early as move 11 and it became apparent that Kramnik was happy to accept a passive, but solid, position, giving Kasparov an extra file of space to operate in.

Garry Kasparov claims more and more space, every piece of his slightly better than its Black counterpart. GMs Maurice Ashley and Daniel King can barely bear the tension as it seems Kramnik’s position must collapse at any moment… but somehow he keeps finding a solution.

Then, suddenly and without warning, Black has a threat of his own: winning a pawn. And while White’s position looks decent, the Grandmasters commentating struggle to find a good move.

Kasparov lets the pawn go. His king position is way better than Black’s and he has the bishop pair.

But one pawn becomes two. Could Garry Kasparov lose this?
Check out this classic chess footage of 2 great chess world champions going head-to-head in a game that has it all!

► Corresponding article from this video with extra goodies: https://ichs.co/2ztsfkh