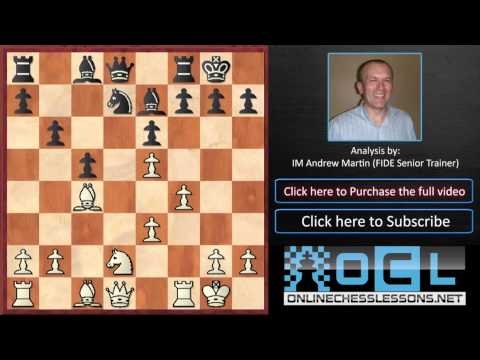 The Colle Opening is a quiet opening for white that is based on an extremely sound positional foundation. In the Colle Opening, white is not trying to dominate his opponent early in the opening and trying to win with a spectacular tactical shot in less than 20 moves. Rather, white is aiming to take his opponent out of opening theory and into new and different types of positions. In the below chess video excerpt from the chess DVD ¨The Colle Opening: Busy Man’s Chess Openings¨ IM Andrew Martin explains a few key ideas in the Colle Opening by examining a fine attacking game by Gata Kamsky at the 1990 Paris Chess Championship. IM Andrew Martin’s presentation is highly entertaining and extremely clear as he outlines one of the more aggressive formations in the Colle Opening – the Stonewall Set-up with an early f4 followed by an attack in the center and kingside.