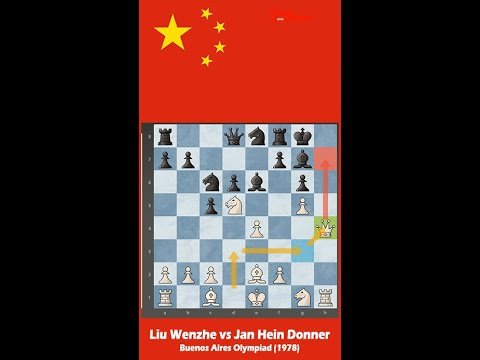 In round one of the 1978 Olympiad China won a famous victory over Iceland. Amongst the casualties was Grandmaster Sigurjonsson who lost to Qi Jung Xuan. Coming upon Sigurjonsson, … Donner had attempted to console him with the following unfortunate choice of words: “Tell me, Grandmaster, how can a Western European Grandmaster lose to a Chinaman?” In round eight, the Chinese played Holland. And the unlucky Donner got an answer to his question…
___________________________
Liu Wenzhe (2200) vs Jan Hein Donner (2490)
Olympiad (1978) Pirc Defense: Chinese Variation (B07)