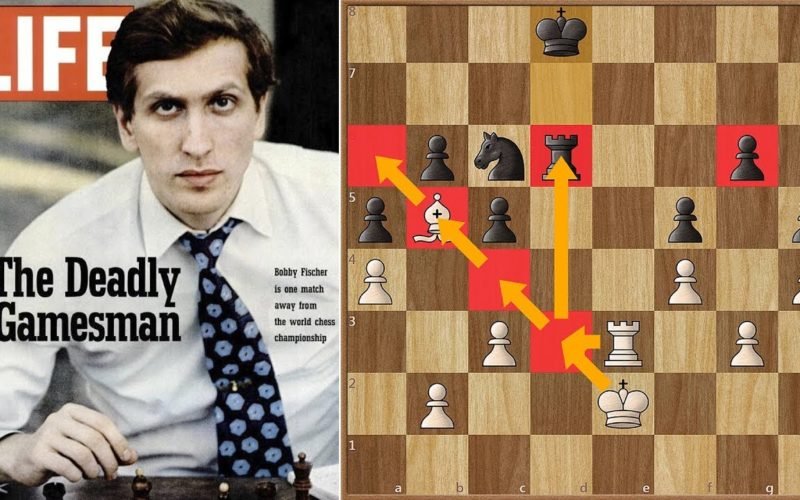 Soon after the Palma de Mallorca Interzonal (1970) qualifier was held, the first stage (the quarterfinals) of the Candidates matches was held in four cities in May 1971. In Vancouver, Canada there was a 10 game match between Mark Taimanov and Bobby Fischer, played May 16th – June 1st.
Fischer sensationally won the match with a perfect score of 6-0, thereby proceeding to the Fischer – Larsen Candidates Semifinal (1971).

After the event, Taimanov was famously reported to have said, “At least I still have my music.” He wasn’t being merely melodramatic: the consequences of this loss were to haunt him for years. Taimanov later recounted in an interview with Joel Lautier:

“Until the match with Fischer in 1971, everything went smoothly in my chess career. This dramatic match changed my life into hell.”

“As Fischer himself admitted at the time, the final score did not reflect the true balance of strength. The terrible feeling that I was playing against a machine which never made any mistake shattered my resistance. Fischer would never concede any weakening of his position, he was an incredibly tough defender. The third game proved to be the turning point of the match. After a pretty tactical sequence, I had managed to set my opponent serious problems. In a position that I considered to be winning, I could not find a way to break through his defenses. For every promising idea, I found an answer for Fischer, I engrossed myself in a very deep think which did not produce any positive result. Frustrated and exhausted, I avoided the critical line in the end and lost the thread of the game, which lead to my defeat eventually. Ten years later, I found at last how I should have won that fatal game, but unfortunately, it didn’t matter anymore! I have written a book about this match, entitled How I Became Fischer’s Victim, it represents an essay on the American player and describes how I perceived his style and personality, once the match was over.”

“The sanctions from the Soviet government were severe. I was deprived of my civil rights, my salary was taken away from me, I was prohibited from travelling abroad and censored in the press. It was unthinkable for the authorities that a Soviet grandmaster could lose in such a way to an American, without a political explanation. I therefore became the object of slander and was accused, among other things, of secretly reading books of Solzhenitsin. I was banned from society for two years, it was also the time when I separated from my first wife, Lyubov Bruk.”

Check out ALL my videos here https://www.youtube.com/watch?v=f-ZOwHdNLO0&list=PLDnx7w_xuguFTxcfiM11bB1JchtHclEJg