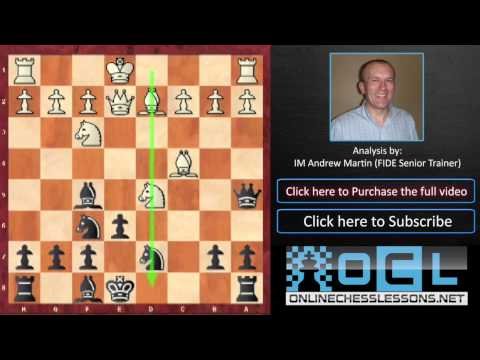 The Center Counter Defense (also known as the Scandinavian Defense) with 1. e4 d5 is a very interesting opening that is common among club level players but rarely seen by leading Grandmasters. This may lead you to believe that the Center Counter Defense is a ¨bad¨ opening and there are specific variations white can play that clearly refute the Center Counter and will guarantee white an excellent position from the opening. But this couldn’t be farther from the truth! The Center Counter is most definitely a viable opening for chess players of all levels and in the below chess video excerpt from the chess DVD ¨Center Counter Rising¨ renown chess presenter IM Andrew Martin demonstrates many of the common traps that black should be wary of, as well as many of the key concepts that black should be familiar with to emerge from the opening with a promising position. IM Martin explains that although black does take his queen out early in the game and it will certainly be exposed to attack, as long as you understand the common pitfalls and how to avoid them – you should every chance to fight for an advantage from the opening moves.