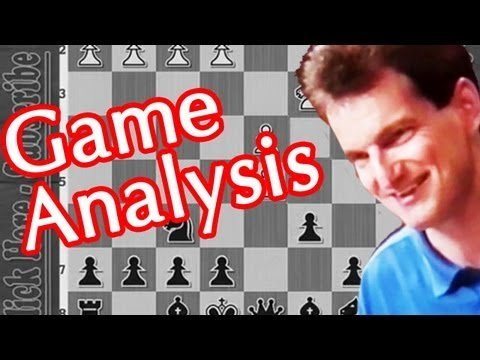 Between travels this summer and my studies, I have had very little time to actually play chess recently. Earlier this week, on a study break I managed to squeeze in a few games. Playing the black pieces against a Senior Master, I try to steer towards my favorite Dzindzi Indian, but with 2.Nf3 and 3.g3 he showed he did not want to go there. I answered with very solid 6…c6 and 7…Qa5 variation which is recommended by GM Roman Dzindzinhasvili in one of his earlier DVDs. Instead of the most common 8.h3 Be6 etc, my opponent whipped out 8.Bg5, but after 8…h6 9.Bxf6 Bxf6 Black had secured the bishop pair. White had a slight advantage in space and development, but after the ineffectual 13.cxd5 and 14.Rac1, the prophylactic retreat 15…Qd8! Secured Black equality. With 14…Nc6, 16…Bd7 and 17…Rc8 I was able to complete my development. Limiting the white knight with 19…b6 (!) is a positional motif I learned from Karpov. With 20…Na5!? I opened the c-file and my opponent began exchanging all the major pieces. However, his 24.Qc1 offering to exchange queens went a step too far. We will see as the game progresses and the chess board opens up, the differential in strength between the bishop pair and KN+B combo becomes greater. Therefore White should keep the queens on the board as that offers his best chance at one day creating counter-play. Once the queens were exchanged, the next step is centralizing the king. In the endgame, my good friend GM Yasser Seirawan considers the king has an attacking and defending value of about 3.5 points and I completely agree. After 28…Kd6 a quick piece to piece comparison shows Black has a better king (centralized) and the bishop pair. The timely 30…e5! forces open the g7-b2 diagonal which exposed the white queenside pawns to the black forces. The touch 33…Bb2 further weakened the white queenside and game my king access to the b4 square. After 34…Kc5, 35…Kb4 and 36…Kc3, we can see White is getting overwhelmed on the queenside. The maneuver 37…Bg4+ followed by 38…Be6 created an x-ray attack on the white b3 target. With 41…d4! The board is opened even more for the black bishops and the fate of the white pawn on b3 is sealed. In the final position Black is a pawn ahead (with a4 falling) and his bishop and king dominate.

In my youth I really took time to studies games of this nature. What I like is that White’s errors were very tiny in nature and almost imperceptible to the untrained eye. In fact I would actually consider them more in the nature of inexactitudes — 9.Bxf6, 13.cxd5, 14.Rac1 and 24.Qc1 etc. This game shows the long term latent power of the bishop pair and the king as an attacking force in the endgame.