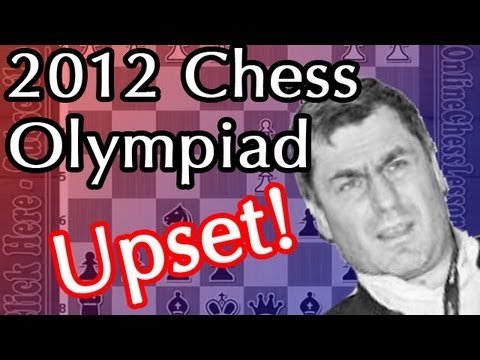 As one might expect, the powerhouse team from Ukraine won the match 3 -1 versus Qatar. However the biggest upset so far occurred on board one of the match. Perrenial World top ten GM Ivanchuk, playing the black side of a B-b5+ Anti-Sicilian seemed well on his way to playing a positional masterpiece on the light squares. We pick up play at move 40 where White has every single pawn on the color of his own bishop. By comparison, the stud black knight is centrally posted on d5 and perpetually attacking the white pawn base on c3. The only drawback to the Black position is his queen on a5 and rook on a4 are bit far away from his own king. GM Al- Modiahki realizes that continued quiet play will lead to inevitably being squeezed to death. Therefore, White seizes the moment with 40.f5!? to create counter-chances against the black king. As I was watching the game online, I was expecting Ivanchuk to show us the SUPER GM stout defense — rebuff White and exploit his positional trumps! Ivanchuk’s initial response 40…exf5 was correct, but on his next turn 41…Qb5 could have been replaced with the more precise 41…b5! Ivanchuk’s excellent pawn sacrifice 43…h5! Followed by 44…Kh7 completely stymied White’s h-file attack. All was still under control for Ivanchuk had he found the critical pawn sacrifice resource f7-f5 (!!) on either move 49 or move 50. Instead, his error 50…Ne4?? destabilized his knight and the rescue operation 51…f5, 52…Nxf6 allowed decisive penetration by the white queen with 53.Qc8! Ivanchuk attacked the white queen with 53…Rc6 and then resigned without waiting for the knockout punch 54.Qf8! with threats of 55.Qg7 mate and 55.Rxf6 netting the black knight.