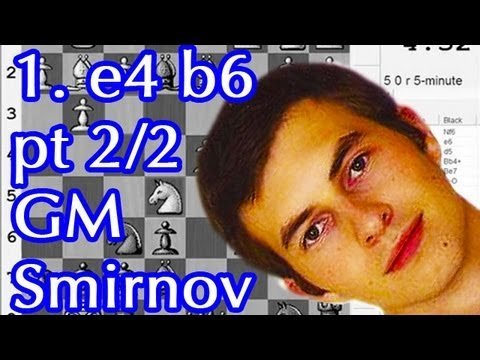 Do you want the very best chess openings to dominate your opponents right from the start of a game? 🤔 Build a powerful opening repertoire with GM Igor Smirnov’s excellent “Grandmaster’s Opening Laboratory”. Get instant access with a 35% discount here ► https://ichs.co/2BmvdZN

It’s a chess opening for Black that is often, wrongly, underestimated. In part two of GM Igor Smirnov’s exploration of Owen’s Defense (1. e4 b6), Smirnov fully explores the main lines of the opening, and takes a look at the most challenging variations.

A relatively unknown chess opening for Black, you should be ablet o surprise your opponent right from the beginning of the game and pull them into unknown territory. Forcing the opponent out of their opening repertoire can prove very useful, not only for so that they have to think for themselves, but as a psychological victory too. There are plenty of tricks and active possibilities for Black, making it one of the best chess openings to have in your deck, especially when you face off against amateur players, at the local chess club, or in quick games.

With Owen’s Defense, Black uses a hyper-modern concept of letting the opponent place his pawns in the center, seemingly in control, but then make them the targets of attack. In part 2, you’ll learn some more tricks that you can use to demolish your opponent and leave them stunned.

The variations can get rather wild and exciting. Black’s idea is to fianchetto the queenside bishop and weaken White’s position by doubling their pawns. A White player who isn’t prepared for this opening may quickly find themselves in a lot of trouble and unable to recover.

John Owen once used the opening named after him to defeat one of the best players of all time – Paul Morphy – in an informal game in London. If it can catch out even the very best players in history, it’s definitely a chess opening worth remembering when you want to try something a little different.

The bonus with this opening is that it can also also be adapted and used by White. Instead of playing 1. e4 b6, White can instead play the move 1. b3! Not many Black players will expect this. If Black then plays 1…b6 anyway, it doesn’t hurt to have an extra tempo as White.

While many players consider the move 1…b6 to be an incorrect line that breaks some of the basic principles of chess openings such as immediately battling for control of the center, GM Igor Smirnov is confident that they couldn’t be further from the truth. Already underestimating the effect of Owen’s Defense could be a deadly mistake from White.