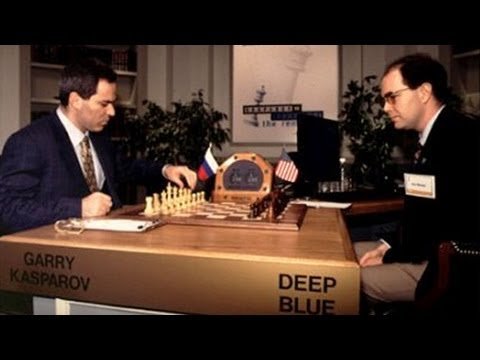 Kasparov vs Deep Blue – the first time a computer beat a world champion! 😲 Expert analysis from GMs Yasser Seirawan and Ron Henley. Get instant access to the only chess DVD recorded while the historic match was taking place, with 50% off! ►https://ichs.co/2ObOOyI

The match of Garry Kasparov vs Deep Blue is now firmly cemented in chess lore. Computer chess has always fascinated us, used as a litmus test of artificial intelligence. Google’s AlphaZero made world headlines in 2017 when it taught itself how to play chess in just four hours, and then beat the strong Stockfish engine.

The late 90s, however, were when it first started getting serious and a chess computer was getting close to defeating a top-level human player. The first Kasparov vs Deep Blue match had quite convincingly gone the way of the human player in 1996, but now IBM’s super computer was back for the rematch, and stronger than ever before.

Game 1 had been won by Kasparov, with Deep Blue allegedly suffering a bug in the endgame and resorting to a fail-safe move. One of the downfalls of computer chess, perhaps. Kasparov, however, thought this move the sign of a superior intelligence instead, and when game 2 rolled around, Deep Blue won in spectacular fashion when Kasparov resigned in a drawn position.

In this video, analysis of game 2 begins at move 35 as Deep Blue is entering an opposite-colored bishop endgame with a strong advantage for White due to his control of the a-file. Then, on move 45, Garry Kasparov unexpectedly resigned, unable to find a defense against the computer’s infiltration.

The commentary from GM Yasser Seirawan and GM Ron Henley is fascinating as they describe their personal experiences of the time and try to discover the truth as to why the reigning World Chess Champion had resigned in a potentially drawn position.

The latent defensive resources described in this video are downright incredible as the two experienced Grandmasters explain a brilliant defense for Black based on a last-minute perpetual check against White’s abandoned king. This video is all the more instructive because one thing that makes Grandmasters so good is that their level of resistance is very high. A strong GM will never stop trying to create counterplay unless a position is very clearly lost.