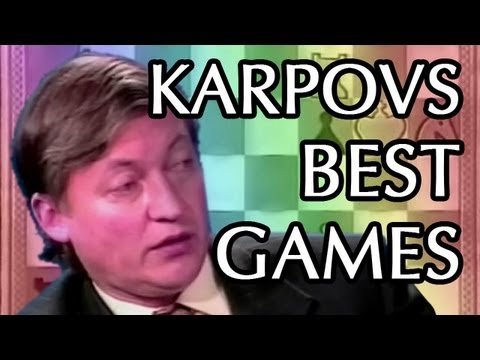 Karpov opens with 1. d4 and Kamsky responds with the Grunfeld Defense, to which Karpov responds with the 5. Qc3 Russian Variation. Kamsky continues with 7. …a6 and 8. …b5 – the ambitious Hungarian Variation where black normally goes for a double-fianchetto to increase pressure against white’s center. The game immediately plunges into unforeseeable complications after Kamsky’s risky 10. …c5!? – permitting Karpov’s 11. e6 to permanently weaken black’s king. Kamsky continues very energetically to compensate for his long-term weakness in pawn structure, however Karpov’s play is simply too straightforward and logical to allow any devastating tactics from the black pieces. Kamsky sacrifices his queen for a bishop and rook in an attempt to achieve some type of drawn endgame where black can set up a fortress to defend his kingside, however Karpov’s technique is better than ever. Karpov begins by blockading black’s past a-pawn to neutralize all prospects of counterplay. Karpov proceeds to pick apart black’s position and expose his subtle lack of coordination, leading to a dominating attack for the white pieces against black’s stranded king. Karpov senses the critical moment and changes his entire focus to the kingside attack, leading to Kamsky’s resignation after 41. Rf3.