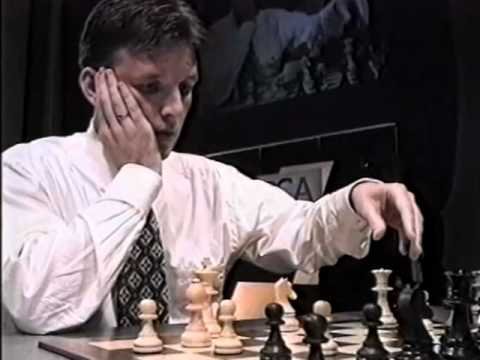 Daniel King 🤴 commentating on Garry Kasparov at the Intel Grand Prix at the peak of his career. One of the most expensive chess video series ever made, what could be better! Get instant digital access to the rest of this 7 hour chess series – with 35% off!! ► https://ichs.co/2zuebag

In this classic chess footage from the 1995 Intel Grand Prix in London, English GM Michael Adams takes on Jeroen Piket in a blitz chess playoff. We join GMs Maurice Ashley and Daniel King at the beginning of the game, with both players thrashing out their moves.

Jeroen Piket, playing White, has 5 minutes to Michael Adams’ 4 – but must win. In the event of a draw, Michael Adams would be declared the winner. Adams plays provocatively with an early …f5 and …g5 pushing White’s pieces back.

But a strange placement of his knight on b6, instead of the obvious c5, hands the initiative to Piket who opens the long diagonal and begins rerouting his knights towards the center. Under sustained pressure, Adams changes the pawn structure, gaining valuable time to generate counterplay. Now Black has the chances but White has the edge in the endgame, providing he survives. Watch how this Armageddon chess game unfolds!

Next up is a Garry Kasparov masterclass as he CRUSHES GM Valentin Arbakov with his favorite King’s Indian Defense.

Daniel King takes up the analysis i at move 15. With 15.a4, White tries to initiate counterplay on the queenside to distract Kasparov from his kingside attack. But Garry Kasparov hits back with 22. …c4! sacrificing a pawn to slow down White’s queenside pressure, granting Black just enough time to build up immense pressure on the kingside.

This game exemplifies Kasparov’s attacking style, as the World Chess Champion simply refuses to back down – instead preferring to mount more and more pressure in the position until his opponent collapses – and gets mated.

We join the game on move 38, in the middle of a very complicated struggle. Vishy Anand had just achieved a beneficial exchange of minor pieces, highlighting the weakness of Black’s king, however Dreev was defending stubbornly with energetic counterplay on the queenside. But when Black seemed to have everything covered, Viswanathan Anand found a series of precise moves to force his rival to resign.

► Corresponding article from this video with extra goodies: https://ichs.co/2zs9Hkx