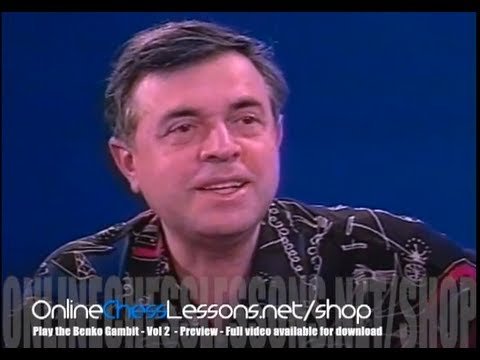 In the Benko Gambit, black sacrifices a pawn very early to generate long-term counterplay on the A and B files. However, white has a mountain of options at his disposal. White can decline the Benko Gambit immediately, he can delay the capture of the a6-pawn, or he can simply ignore the Gambit and proceed with normal development in the center. GM Lev Alburt’s extensive experience and success with the Benko Gambit at the highest level of chess makes it very clear that the Benko Gambit is a very playable alternative to main line responses for black against 1. d4. However, you must be prepared! This opening is ideologically simple, however black can encounter some early tactical complications. The above video excerpt explains how black should react against an interesting sideline with 5. f3!? – where white is basically ignoring the pawn sacrifice and instead prefers to focus on establishing a very strong pawn center. While you can bet on facing a variety of different lines from white in the Benko Gambit, your basic instinct should remain the same: Active piece-play and a flexible mindset will guarantee you success. The 2-Volume DVD set “Play The Benko Gambit!” by GM Lev Alburt is currently on sale and waiting to take your opening repertoire with black against 1. d4 to the next level!