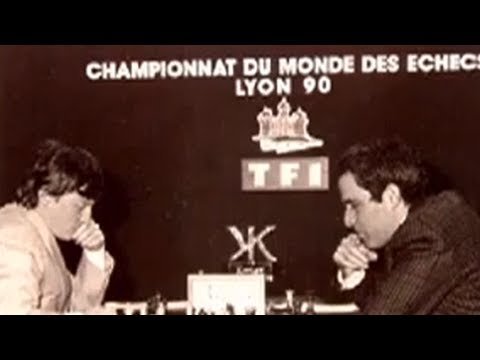 By game 7 in the 1990 World Chess Championship Match, Anatoly Karpov was trailing by a point from an earlier loss. Karpov opened with d4 and Kasparov responded with his preferred King’s Indian Defense, traditionally a very sharp opening that leads to double-edged play. Play quickly led to the Gligoric-Taimanov System, and Karpov was able to generate a slight long-term positional edge with 15. Ng5! and 19. Bxe6 – trading off both of black’s knights so that white’s weak dark squares on d4 and f4 could not be exploited. Karpov’s subsequent play is also extremely instructive, in that he combines activity with energetic prophylaxis – constantly increasing the pressure against black’s position while simultaneously preventing counterplay from Kasparov. This pressure culminated in 27. …Qa5? 28. Nd5! which led to white winning a pawn. Karpov’s biggest asset has always been his impeccable technique, and after the adjournment on move 44 – Kasparov’s team did not return to play and decided to resign to save time and energy. This game is a perfect reflection of Karpov’s style, objectively evaluating exchanges to create long-term positional pressure which led to slight material gain and an advantage in the endgame. Karpov’s style is fascinating in how he is able to so smoothly combine energetic pieceplay with targeted prophylaxis, making his World Champion opponent Garry Kasparov appear completely helpless!