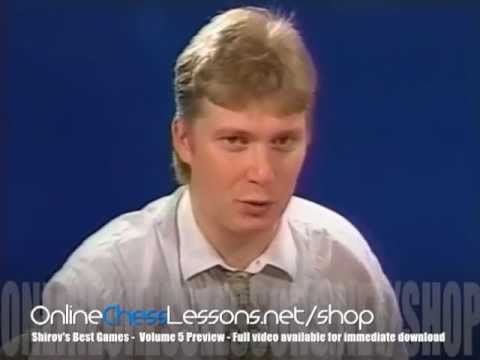 Karpov begins with 1. d4 and Shirov responds with the double-edged King’s Indian Defense. Karpov employs his preferred Fianchetto system and Shirov also goes with his pet line, the Panno Variation with 6. …Nc6, 7. …a6, 8. …Rb8 – intending to initiate counterplay on the queenside before white is able to complete development and commence operations in the center. With 12. a3 Ng4!?, Shirov relies on tactics to save his Na5 – resulting in a strong position for black after 14. …b5. Shirov continues playing extremely aggressively to knock the former World Chess Champion Karpov back, and with 20. …Rb8!?, 21. …Ba4!, and 22. …Nd3 black emerges from the complications with a dominating position. Shirov accurately conducts the attack and forces Karpov to resign after 33. …Qxd1.