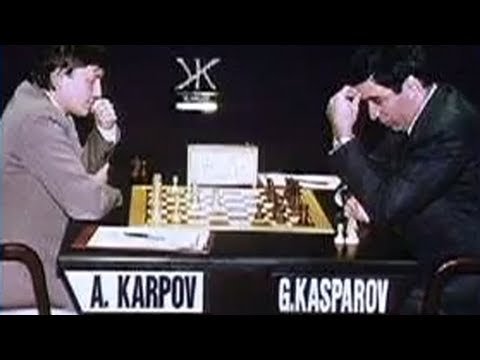 This video excerpt from Volume 2 of “World Championship Chess DVD Series” examines Game 16 of the 1987 Kasparov-Karpov World Championship Match in Sevilla, Spain. Earlier in the match, Karpov and his team had prepared a very nasty surprise for Kasparov in the English Opening and it was especially interesting that Kasparov had analyzed the theoretical novelty with his own team and decided to explore it again in game 16. Kasparov deviated from the previous game after Karpov’s novelty 8. …e4!? and chose 9. Nd4 instead of his earlier choice 9. Ng5!? Karpov was then able to achieve a very eclectic type of positional pressure in the resulting position, maintaining control of the queenside and securing excellent outposts for his knights. With 19. f4, it seemed that Kasparov had obtained a lasting positional advantage with his two bishops on open diagonals, however Karpov is quick to explain in the “World Championship Chess DVD Series” that this pressure is only superficial and that black’s knights on the queenside really control the game. Kasparov began to feel the heat and entered into dubious complications with 24. f5?!, losing a pawn and facilitating black’s pieces to become more active. Kasparov did secure some counterplay by weakening black’s kingside, however Karpov managed to win a pawn and shore up his defenses. Karpov’s ensuing technique to finish the game is highly instructive as he combined attack and defense to convert his extra pawn in convincing fashion.