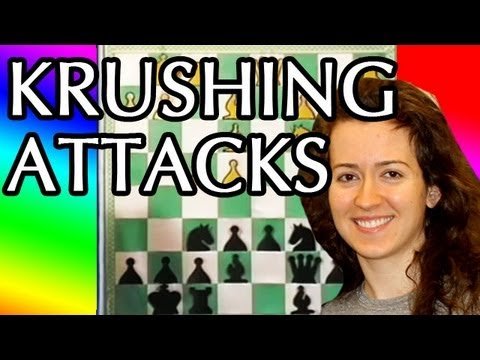 Irina Krush responds to an aggressive e4 opening with the Benko-Sozin Variation of the Sicilian Defense, again aiming to take white out of the main lines. White immediately starts a kingside assault with 11. f4 and 13. g4, however this proves premature as Irina Krush thematically responds with the central break 13. …d5! and 14. …Rd8! – exposing white’s lack of development. Black’s play in this game is excellent, unafraid to trade pieces as Krush moves toward a very basic plan of infiltrating with the black rooks on the d-file. White is entirely unable to cope with the mounting pressure and resigns after 26. …Qxf4 – preferring to capitulate than play a horribly lost endgame down 2-3 pawns. This game personifies Krush’s smooth attacking style, and it should be noted that she truly attacked/traded in this game without subjective bias.