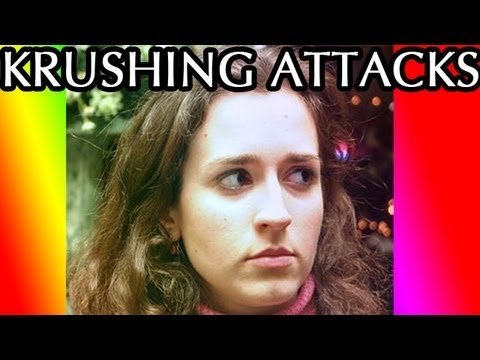 Krushing Attacks: Volume 2 features a teenage Irina Krush showing off her chess skills with the help of Grandmaster Ron W. Henley. Irina Krush is a 4-time US Women’s Chess Champion and currently boasts the professional chess title of International Master. In the DVD set Krushing Attacks, this female chess prodigy explains her sharpest and most instructive wins of the late 20th century – bringing viewers into the world of a chess genius with a sparkling personality. Krush’s style is characterized by strong natural talent, a hard work ethic, and impressive positional intuition. In Volume 2 of Krushing Attacks, viewers will find inspiration in Irina Krush’s direct teaching method – making these videos a must-see item for chess players of all ages and skill levels.

Krushing White With The Sicilian Defense!

Irina Krush responds initially to 1. e4 with the Sicilian Defense, and then switches away from the main lines to a Benko-Sozin with 6. …Qb6 after 6. Bc4. After both sides complete most of their development, black tries to gain space on the queenside with 11. …a6 (intending …b5), but is stopped by white’s attentive 12. a4. However black still manages to make room for her light-squared bishop on a good diagonal with 12. …b6 (also preventing white from achieving a clamp on the queenside with a5). After 14. g4!? white commences a dangerous kingside attack, however Irina Krush shows her class and refuses to be intimated – striving for activity in the center to distract white’s pieces away from the kingside. White continued psychoticly by storming the kingside pawns further with 15. g5, 18. f5, 20. g6, and 21. f6 – putting maximum pressure on Irina Krush and forcing a very high level of precision for black to successfully defend. Krush opts for an active defense, picking her spots to counterattack (23. …Qc6!) while coldly calculating a very scary defense. After a flurry of exchanges, with 27. …Nxd3 black emerges with an obvious advantage due to a very strong attack against white’s king while black’s king has somehow fled to safety. While Irina Krush doesn’t exactly finish the game with computer-like precision, she does a great job of getting past the time control at move 30 and completing a decisive counter-attack for the win.