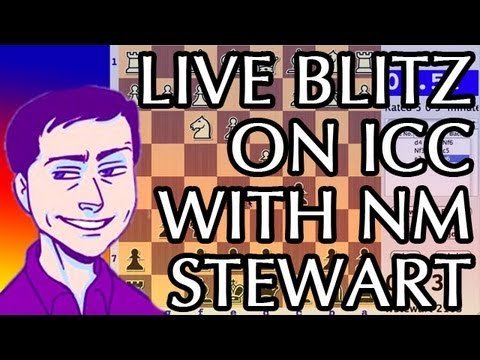 WStewart vs rpenquin: I decided to open flexibly with Nf3 and c4, and proceeded with a double-fianchetto opening. After 9. …Na6 I tried to seize the initiative with 10. g4!? The position became complicated in the middlegame and I went wrong with 23. e5 – although black did have pressure due to his control of my dark squares (notably f4 and e5). 23. e5 conceded the important d5 square to the black knight and my rook somehow ended up horribly out of play on h4. After more complications in the middlegame an interesting material balance arose as I had a R+N for his queen, however my position seemed solid enough to draw. In mutually extreme time pressure, I won on time. After 54. Ng2?? black could have checkmated with 54. …Qh1+ 55. Kg4 Qh5# – but I was lucky enough that he missed it with less than 10 seconds on the clock.