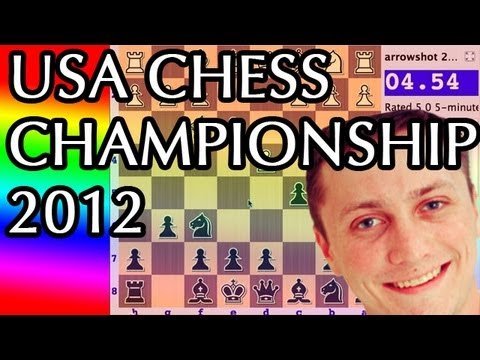 Nakamura began with 1. e4 and Hess responded with 1. …e5 – leading to Nakamura seemingly adopting a Giucco-Piano type set-up with 3. Bc4. However after Hess played 3. …Bc5 Nakamura dropped a surprise bomb with 4. b4!? – sacrificing a pawn with the Evans Gambit! This opening is rarely seen at the GM level but I suspect that Nakamura spotted a deficiency by Hess in previous games in this line and decided to give him a Super-GM test in preparation. Hess responded with the Stone-Ware Variation with 5. …Bd6 and 6. …Qe7 – attempting to consolidate his position in the center and avoid any devastating tactics by Nakamura. However after straightforward developing play by Nakamura, Hess found himself in a tough spot and considerably weakened his position and gave the pawn back with 9. …Ba3?! Nakamura continued to actively build the pressure and blasted open black’s position with 20. e5! – opening up the h1-a8 diagonal for the queen and further opening the position for white’s bishop (also potentially opening the f-file to establish a focal point on f7). In the ensuing complications Nakamura snagged a pawn and set himself up for a comfortable endgame. However the game did not progress out of the middlegame as Hess found himself in extreme time pressure, leading to a blunder with 27. …Qb1?! and 28. …Qxa2?? – removing his queen from the defense of his king and permitting a winning combination by the attentive Nakamura. Nakamura accurately closed the game out with 30. Rd7 and the rook sacrifice 31. Rxg7! – after which black had no chance to defend.