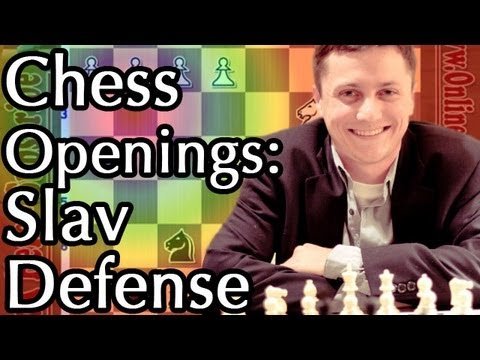 Parts 1 and 2 of this Beginner Chess Openings series on the Slav Defense covered the main lines associated with early Nf3, Nc3, and e3 lines. Part 3 analyzes the Exchange Variation and black’s best responses. The Exchange Variation looks harmless on the surface, but there are many subtle opening traps that can lead to a dangerous white initiative on the queenside. I recommend to respond to Qb3 with Qc7, as the queen controls the b8-h2 diagonal and if …Qb6 then Qxb6 axb6 leaves black with a pair of weak doubled pawns. Another important point is to recognize when white delays kingside development and castling to instead try to build up pressure on the c-file and against the knight on c6 with Bb5, Ne5, Rc1 etc.. – the best response to this queenside pressure is to play an early …Nd7 as prophylaxis against a Ne5 invasion by white. The following video explains two games played by top grandmaster experts in the Exchange Variation of the Slav Defense, and demonstrates two very effective methods of counterplay for black.