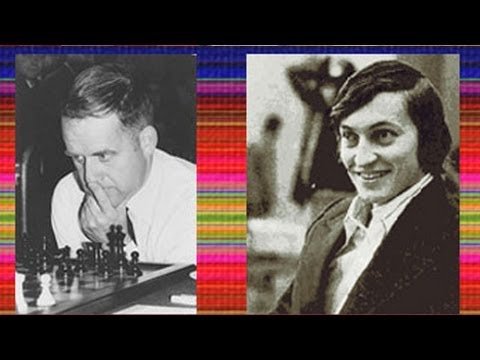 Karpov puts on an absolute clinic in this game, demonstrating the power of prophylaxis and deep positional maneuvering in the Ruy Lopez (also known as the Spanish Game). Unzicker opts for the Chigorin Defense, although with the awkward knight retreat 13. …Nd8?! black’s pieces become very difficult to coordinate. Karpov methodically fixes the queenside with 14. a4 and 16. b4! – depriving black of any counterplay on that side of the board and allowing white to consolidate his position before pressing forward. Karpov introduced an incredibly effective blockading method with 24. Ba7! – completely shutting down black’s activity on the a-file and allowing white to completely regroup before opening up another front on the kingside with 30. f4! Unzicker attempted to shut down the position and huddle into a defensive crouch to passively try to make a draw, however Karpov attentively sought to weaken the light squares on black’s kingside with 35. Bh5! and decisively infiltrated with 43. Qg6. Unzicker resigned after 44. Nh5 as his entire position was in near-perfect zugzwang.

After the game, Unzicker declared “One is permitted to lose to Karpov with black!”