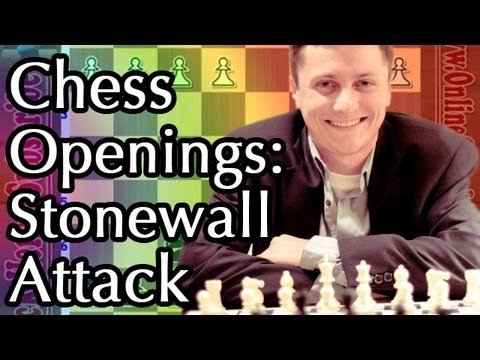 Part 4 of the Stonewall Attack Series features none other than former World Chess Champion Mikhail Botvinnik employing the Stonewall Defense with the black pieces in Groningen 1946 against Herman Steiner. Botvinnik responds to d4 with an interesting move order, however with 6. …d5 he confirms the basic structure of the Stonewall and establishes an air-tight grip on the e4 square. This game is a fantastic example of how to attack with the Stonewall against a fianchettoed kingside, demonstrating an accurate queen manuever with 9. …Qe8 and 10. …Qh5 – steadily increasing the pressure against white’s kingside while preventing any type of counterplay in the center. Botvinnik goes on to seize space and clamp down on the white position with 15. …f4! – after which white is unable to discover an active plan to fight back against black’s attack. Botvinnik follows with an excellent rook maneuver 20. …Rf7! which enables the most efficient regrouping of black’s pieces for a decisive kingside attack. Botvinnik finishes the game by establishing the focal point of his attack on g2 to tie white’s pieces down, only to change the direction of his pieces towards the indefensible h2 square. This game is a great example of how to use the Stonewall to systematically break down a fianchetto defense.