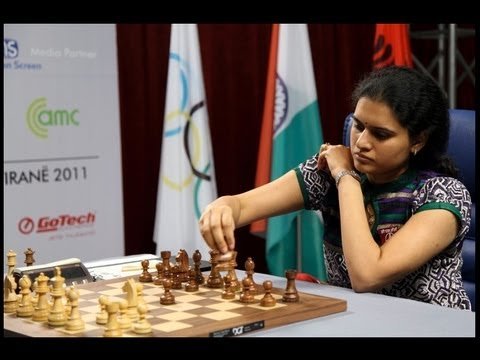 Humpy Koneru vs Jan Smeets: Corus Wijk Aan Zee 2006 – Koneru opens with d4 and Smeets responds with the Slav Defense. After 6. Bd3, Smeets takes the opening into the Semi-Slav Defense with 6. …Dxc4, then the Meran Variation with 7. …b5 – hoping to obtain active counterplay against white’s strong center. Smeets reacts innaccurately against Koneru’s 16. Qh3, placing the queen in the line of fire with 16. …Qd7? and losing a crucial tempo after 17. Rd1 Qe7. Koneru exploits this loss of time with an excellent pawn sacrifice – 18. e5! – opening lines in the center and avenues for attack against the black king. Koneru follows actively with 19. Bg6+! and for the rest of the game Smeets is forced to defend. Smeets opts for an active defense and tries to achieve queenside counterplay with 24. …Qb4!? – however the threats against his king are very dangerous. While approaching the time control at move 40, Smeets is unable to find the most accurate defensive resources and Koneru is able to trap his queen nicely with 40. Bc2!