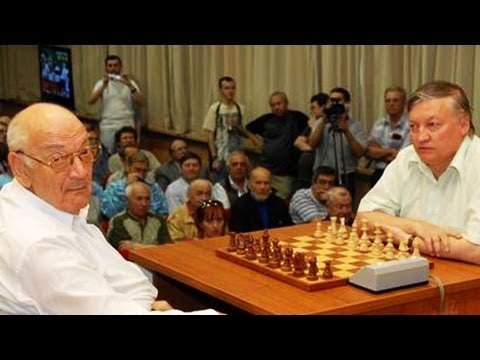 Anatoli Karpov vs Viktor Korchnoi: Game 2 of the 1974 World Championship Candidates Match in Moscow, Russia. Karpov opens with e4 and Korchnoi responds with the Sicilian Dragon. Karpov plays the extremely aggressive Yugoslav Attack, a line involving opposite-side castling and violent attacks. Korchnoi plays a topical line with 12. …Nc4 to exchange white’s strong bishop on b3, however this maneuver costs him valuable time to start his own attack against white’s king. Karpov sacrifices a pawn with 14. h5 to open the h-file, and proceeds with a fantastic prophylactic plan involving 16. Nde2! and 19. Rd3! – entirely preventing black’s attacking ideas revolving around an exchange sacrifice on c3 so that white can direct his full attention to the kingside. Karpov finishes the game with a sharp tactical sequence, sacrificing another pawn to open lines against black’s king. Korchnoi was unable to defend and resigned after 27. Qh8+, in light of 27. …Ke7 28. Nxd5+ Qxd5 29. Re1+.