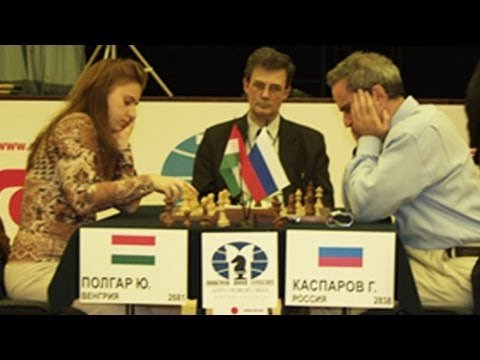 Want to win more chess games with the advanced secrets that helped Judit Polgar beat 👊 Kasparov? Then signup today for GM Damian Lemos’ FREE rapid improvement masterclass and get the most ELO gain in the shortest amount of time! ► https://ichs.co/2yMdKsw

This historic Judit Polgar vs Garry Kasparov game took place in round 5 of the 3rd Russia vs Rest of the World Match, 2002. (The first was in 1970 and the second 1984 so very different players in each).

Playing for Russia were 4 World Chess Champions: Garry Kasparov, Anatoly Karpov, Vladimir Kramnik and Rustam Kasindzhanov (FIDE World Champion). The Rest of the World team could only field two: Vishy Anand and Ruslan Ponomariov (FIDE World Champion). However, the supporting cast of Judit Polgar, Boris Gelfand, Vassily Ivanchuk and Alexei Shirov was strong enough to challenge anyone and, the Rest of the World team’s average rating was 1 point higher than Russia’s.

Judit Polgar opens the game with 1.e4 and we get a Ruy Lopez (Spanish opening) and Garry Kasparov opts for the Berlin Defense, as famously used by Vladimir Kramnik to frustrate Kasparov during their World Chess Championship 2000. The Berlin Defense, however, had rarely been used by Kasparov before and he did not seem comfortable playing it.

Polgar plays actively and slowly builds her advantage while Garry Kasparov seems confused by the line and is unable to effectively develop his pieces. While this game doesn’t have the ultra-aggressive attacks both players are often associated with, it is still a very accurate reflection of Judit Polgar’s style, in that her play is extremely logical and straightforward.

Once Judit Polgar is able to double the rooks on the 7th rank, Kasparov’s position is hopeless. I believe this Judit Polgar vs Garry Kasparov game was important from a historical perspective as it was the first time – in ANY sport – that the #1 women’s player in the world beat the #1 men’s player.

► Corresponding article from this video with extra goodies: https://ichs.co/2yLW6oR