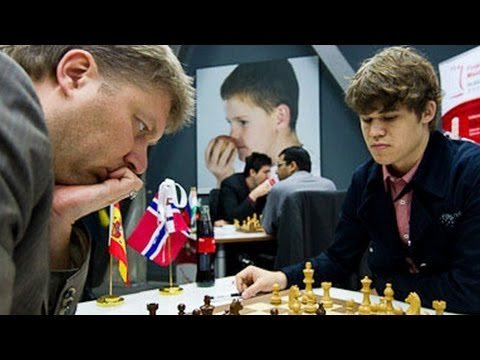 Carlsen played d4 and Shirov’s response came as no surprise as he played the active Meran Defense. Carlsen’s early 13. Nd4!? provoked a slower response from Shirov, beginning his time-trouble issues with 16 minutes spent on 13. …e5. Carlsen’s strange and rapid play began to immediately affect Shirov, as he spent a costly 43 minutes on 16. …Bc5. Carlsen played extremely quickly and strove to create maximum tension and complications to take advantage of Shirov’s lack of time. By move 27, the dust was settling: white had an extra protected past pawn and definite attacking possibilities against black’s king that was stuck in the center. Shirov attempted to defend, however his lack of time combined with Carlsen’s rapid and resourceful attack led to black’s resignation after a tactical oversight.