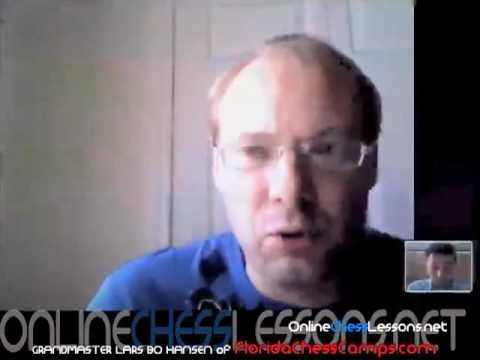 In this interview Grandmaster Lars Bo Hansen discusses everything from the problems of cheating in chess to how his dad’s involvement as a chess organizer has inspired him to rejuvenate the sport of chess in his new hometown of Orlando, Florida. Like Anish Giri he also emphasizes having a variety of interests and not becoming too obsessed with the sport can actually help your chess.

Lars Bo Hansen was born and raised in Denmark and lived there with his wife and kids, until just a few years ago when they decided to pack their bags and head to sunny Florida. Bo Hansen sports a very impressive FIDE that is nearly always above 2550. He is the 2nd highest rated player in Denmark and the #1 highest rated player in Florida. His wife (WIM) and son (NM) are also titled players and actively involved in promoting the sport in Florida.

Lars Bo Hansen runs a chess camp in Florida along with his wife and kids. To learn more about Lars Bo Hansen check out: http://www.floridachesscamps.com/profiles.htm

FROM HIS WEBSITE:
GM Lars Bo Hansen is the Number 1 chess player on the Florida rating list. He is one of the most acknowledged chess writers in the world, author of four highly acclaimed books from Gambit Publications.
Among GM Hansen’s best chess achievements are: Winning five Danish National Championships, three German Team Championships and 20 International tournaments. He has represented his native Denmark at six Chess Olympiads, winning a Bronze Medal at the 1990 Olympiad.

GM Hansen served as National Head Coach of Denmark’s Chess Federation before relocating to the United States. As a National Coach he worked extensively with both young talents and Grandmasters.

Along with his Chess career, GM Hansen holds a Master of Business Administration (MBA) from Copenhagen Business School. For the past ten years he has been lecturing on Business Strategy and Marketing Management at universities in Denmark, Germany and USA. GM Hansen is currently working on his PhD, with particular focus on Strategic Sport Management.