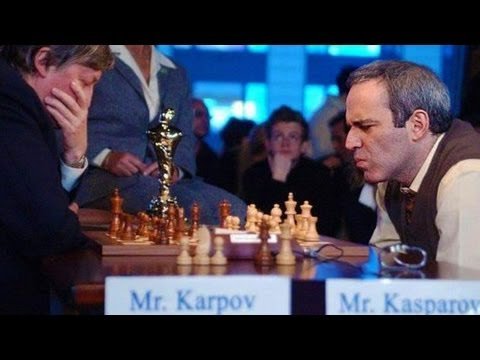 Want to take a QUANTUM leap 🐸 in your chess? Then signup today for GM Damian Lemos’ FREE rapid improvement masterclass that will give you the most ELO gain in the shortest amount of time! ► https://ichs.co/2zAgWah

In 2009, Garry Kasparov played a 4 rapidplay + 8 blitz games match against his old rival, Anatoly Karpov. It was the perfect format for two world chess champions to face each other with: lower time controls reduce the stamina required and favor intuitive judgment over brute-force calculation.

While Garry Kasparov won the match, Anatoly Karpov showed he can still produce beautiful chess in this demolition of his great chess rival.

Anatoly Karpov opens with his normal d4 and Kasparov responds with the sharp Grunfeld Defense. Karpov attempts to avoid excess complications in the opening by fianchettoing his kingside bishop, although Black is able to create quick counterplay with 7. …c5 and 8. …e6.

An unusual knight maneuver (10. Nec3!?) by Karpov achieves solid control of the center. Kasparov plays actively with 13. …Bd4!? and Karpov is forced to create a mass of complications beginning with 14. a5!?

Soon, Anatoly Karpov had won the exchange but Kasparov had great dynamic counterplay and, after some ultra-sharp tactical play by both sides, it looked like Garry Kasparov had forced the win of a piece!

However, the wily Karpov had already seen this and responded with the calm 27.Rxc5!, giving up the knight and combining skewer threats with a powerful passed pawn. Black had one of those positions that look good at first glance but hold very few moves that aren’t just bad.

Kasparov used some nimble piece maneuvers and tactical threats to escape from the rook skewer but, when the dust settled, it became obvious that Karpov’s d-pawn was going to decide the day.

Kasparov had one chance to salvage the game late on, however he blundered in severe time-trouble 32. …Bc1 33. …Nd3+ and 34. …Bc2 – allowing White to easily promote his passed d-pawn. Black played well but it was no Kasparov masterclass.

It may have been played 25 years after their first World Chess Championship match , but this Karpov vs Kasparov encounter showed they still have the same fighting spirit and will to win.

► Corresponding article from this video with extra goodies: https://ichs.co/2zBodGJ