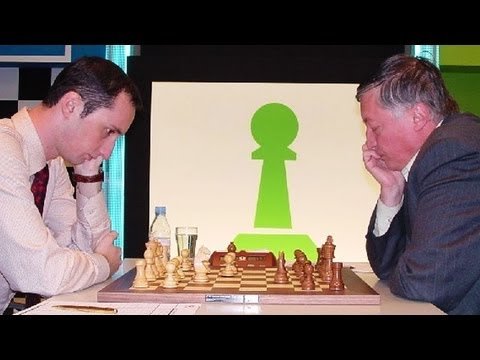 This video presents a game between Anatoly Karpov (Russia) and Veselin Topalov (Bulgaria) from the chess super-tournament – Linares, 1994. This video is hands down one of my favorite games from what had to be one of the most famous chess tournaments of the 1990s. The 1994 Linares tournament had an average ELO rating close to 2700, which at the time was the highest ever.

Former World Champion Karpov played one of the strongest tournaments in the history of chess, with a performance rating at over 2900! Karpov dominated the round-robin with a score of 11/13 against a field containing the other 13 best players in the world at the time (none other than Kasparov, Shirov, and Kamsky to name a few). Karpov is renowned for his exemplary and patient positional style. However in this game he sacrificed no less than 2 exchanges to win in forcing fashion with 7 consecutive checks at the end of the game. Although this chess game is a bit older, I wanted to present this game in respect to the tradition of the super-tournament – Linares, which I recently found out has been officially cancelled for the year 2011. Supposedly the tournament will be held in 2012; however doubts about adequate sponsorship remain. I hope you enjoy this video, which shows a crushing, sacrificial attack by one of the best chess players ever, Anatoly Karpov.