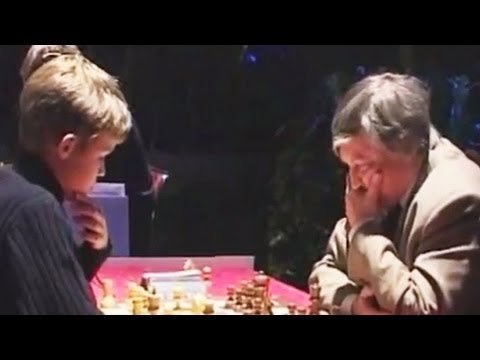 It’s always a special occasion when chess world champions face each other and this game is no different. When Magnus Carlsen met Anatoly Karpov in the World Blitz Cup 2007, it was very much a clash of the generations.

The matchup was made all the more interesting by the similar styles of the players. Magnus Carlsen´s style is the definition of universality – he is comfortable in a variety of positions and excels at both attack and defense. But the distinguishing factor of Magnus Carlsen´s success must be his exceptional positional understanding and endgame technique – very reminiscent of former World Chess Champion Anatoly Karpov!

Not only is Magnus Carlsen´s strength in positional play similar to Karpov’s, Carlsen´s opening repertoire is remarkably close to Karpov´s as well. Not that Carlsen plays the exact same chess openings as Anatoly Karpov did in his prime, but Magnus Carlsen intentionally chooses quieter openings that do not risk uncontrollable complications, leading to subtler positional battles that are full of tension.

In this chess video, FM Will Stewart breaks down an excellent attacking example from a young Magnus Carlsen against a veteran Anatoly Karpov. Magnus opens 1.e4 and Karpov counters with …e5. After 2.Nf3 comes Nf6, the Petrov Defense.

The Petrov Defense (also known as the Russian Game) is a super-solid opening and Anatoly Karpov is one of its greatest experts. Magnus Carlsen opts for the Nimzowitsch Attack with a bishop on f4, queen on d2 and queenside castling.

Then we get to see 2 masters of maneuvering: Magnus Carlsen forcing structural weaknesses while Karpov parries and launches an attack against White’s king.

With incredible precision, Magnus Carlsen combines the task of defending his king with making mating threats of his own. The resulting threats force Karpov into allowing a combination that puts Magnus Carlsen a knight and pawn up in the chess endgame. Anatoly Karpov resigned a couple of moves later.

Watch the video to get FM Will Stewart’s commentary on the classic clash of world chess champions: Magnus Carlsen vs Anatoly Karpov!

► Corresponding article from this video with extra goodies: https://ichs.co/2zA8nwg