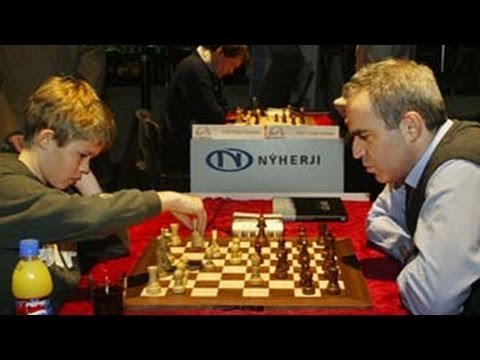 Wish you could have made Garry Kasparov sweat at 13 years old like Magnus Carlsen? 🤔 Then signup today for GM Damian Lemos’ FREE rapid improvement masterclass that will give you the most ELO gain in the shortest amount of time! ► https://ichs.co/2yKuXhq

Carlsen vs Kasparov, who will win? Carlsen opens with 1. d4 and Kasparov responds with a weird sideline of the Slav Defense on 6. …Qa5 – most likely trying to take Carlsen out of his comfort zone and into an opening he had not studied extensively. Carlsen responds very logically with 7. Nd2 and 8. Qc2, calmly defending the important d4 square and breaking the pin on the c3 knight. With 9. …e5!? Kasparov aims to immediately sharpen play, however Carlsen refuses to be baited into uncharted waters and calmly plays 10. 0-0. Kasparov’s 11. …Qb6 seems to be inaccurate as just 3 moves later he plays 14. …Qc7 – making room for his d7 knight to maneuver to b6. Extreme complications ensue and Kasparov is forced to embark on a very awkward maneuver to avoid material loss, leading to a strong initiative for Carlsen after 23. Qc5 Rd8 24. d5! – introducing extreme pressure against Kasparov’s badly coordinated and developed pieces. Carlsen’s position looked nearly winning after 29. Rfe1, although after Kasparov 29. …Bb7, it became apparent that if white played 30. Nxa5, black could sacrifice his bishop with 30. …Bxg2 – leading to a very advantageous position for black. Instead of 29. Rfe1, Carlsen could have played 29. Bc7 which would led to a winning endgame for white as he would capture the a5 pawn and have 2 extra, connected passed pawns. However, after 29. Rfe1 Bb7 – Carlsen was forced to play 30. Nd4, essentially leading to a drawn endgame which Kasparov was easily able to hold – leading to a draw being agreed after 52. Bf2

Watch Kasparov vs Carlsen go at it, after all Magnus Carlsen loses rarely. This video will teach you a great opening for white as well as the semi-slav and slav defense basics.

► Checkout our most recent video: https://ichs.co/latest-chess-video