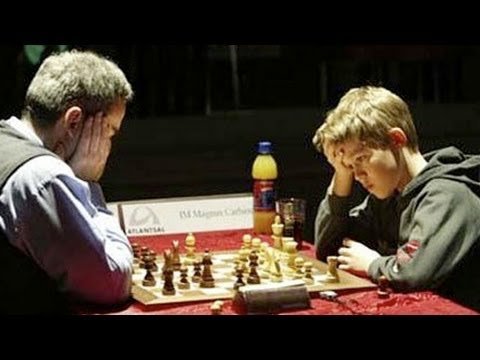 Want to learn some of the chess secrets that helped Garry Kasparov beat Magnus Carlsen? 😃 Signup today for GM Damian Lemos’ FREE rapid improvement masterclass that will give you the most ELO gain in the shortest amount of time! ► https://ichs.co/2zM9tC2

Kasparov vs Carlsen, an epic clash between the world champions of two generations. With the white pieces, Kasparov employs a somewhat strange move order from the English Opening that becomes the white side of a King’s Indian Defense. Carlsen chooses the sharp Gligoric System of the King’s Indian Defense with 7. …exd4, 8. …c6, and 9. …Re8 to which Garry Kasparov responds with the Taimanov Variation with 10. Bf2, 11. exd5, and 12. c5 leading to a very double-edged position in which black must play very actively to maintain the balance due to his long-term positional disadvantage with the weak, isolated d5 pawn. After 17. Rad1, black’s position is visibly difficult as he lacks piece coordination and his previous activity now looks very superficial.

With 22. d7! Kasparov blasts open the position and forces the win of substantial material – leading to Carlsen’s resignation when down a piece after 32. Re3.

Unfortunately Garry Kasparov and Magnus Carlsen only met a handful of times at the chess board – however luckily these games were very interesting and hard-fought. Kasparov played a mini 2-game match at the Reykjavik Rapid in 2004 with Carlsen, when the 41 year-old Kasparov was rated 2830 and the 13 year-old Carlsen was rated 2485. Although Kasparov ended up winning the Carlsen vs Kasparov mini-match 1.5-.5, the games featured an exceptionally high level of fighting chess and it was clear that Magnus Carlsen was up to the task of playing against the former World Chess Champion.

I find it fascinating that Carlsen’s style as a rising chess prodigy was marked by wild tactics and insanely precise calculation, because now Magnus Carlsen is the #1 rated player in the world by a long shot but has considerably modified his style to be less tactical and more positional. Simply put, Carlsen has evolved his play to remain in control at all times and take very few chances. He is the master of positions with small winning chances and no chances to lose. In this historical encounter, Kasparov thoroughly trounced a poorly thought-out plan from Carlsen – making the chess prodigy’s play appear downright superficial.

► Corresponding article from this video with extra goodies: https://ichs.co/2zKbFtP