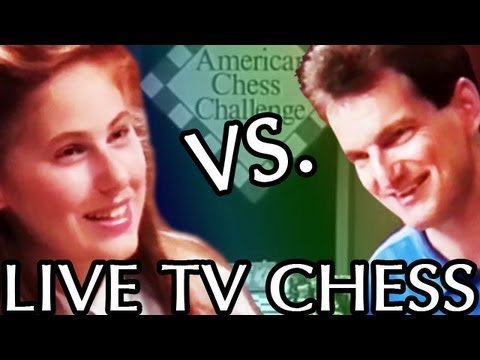 Ever dream of playing strong aggressive chess, just like Judit Polgar? 🤔 Whether playing blitz chess or classical, Polgar’s Master Method will transform you into a Sicilian Defense master. Get instant access with 35% off. ►https://ichs.co/2CyYAEs

Blitz chess on live TV! The year is 1992 and the chess prodigy GM Judit Polgar, only 16 years old at the time, took on GM Ron Henley, a clash of different playing styles that lead to an exciting game. Polgar had become the youngest GM in history just one year earlier.

Judit Polgar plays fast, aggressive, attacking blitz chess, while Ron Henley takes a more solid, positional approach looking to slowly squeeze the opponent – the complete opposite of each other! Looking on and commentating are the popular Maurice Ashley and John Fedorowicz.

This blitz chess game opened with 1. e4 e5 2. Nf3 Nc6 3. d4 – the Scotch Opening. Polgar tries to attack the black king immediately, deploying her bishops with 11. Bh4 and 14. Bh5. This proved somewhat superficial, however, as Ron Henley continued to play persistently and actively in the center.

Despite Black being two pawns up and with superior piece activity, the game isn’t over. Maurice Ashley explains that often in blitz chess, the clock plays an important factor. Judit Polgar had built up a huge time advantage in this 5-minute game. Did Ron Henley manage convert the winning position in time, or did Judit Polgar take advantage of that extra time at hand? You’ll have to watch the video to find out!