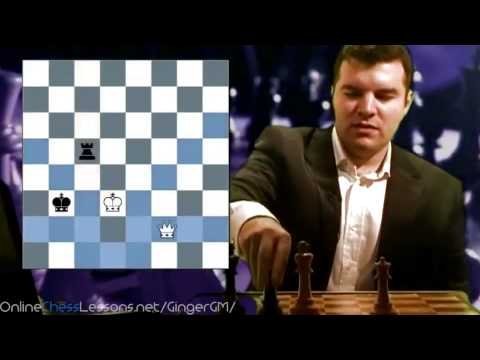 The endgame is one of the most important phases of the game, and yet it is largely ignored by chess players of all skill levels. The below chess video excerpt from the chess DVD ¨Killer Endgames¨ features Grandmaster Nick Pert explaining basic tricks and themes in a very interesting and common type of endgame position – king and rook vs king and queen. Although you may think this endgame is easily winning for the side with the queen, in fact it is actually fairly complicated. This chess ending requires a thorough understanding of a variety of tricks for the side with the queen to either pick off the defender´s rook or force a checkmate. As described by Grandmaster Pert in the below chess video, the winning technique involves pushing the opponent´s king into the corner where the attacker may combine mating threats with double attacks on the defender´s king and rook. While the attacking side with the queen is winning most of the time, GM Pert is quick to point out a few select scenarios where the defending side with the rook can hold the draw.